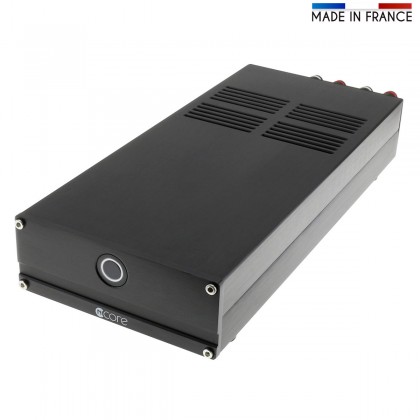 A few small nitpicks: the feet of the amp slide around quite a bit, they are not rubber-coated. The rear panel is quite cramped, making it difficult to swap cables. This is a side effect of the small size of the amp, so it's understandable.
(0)
(0)
Cet avis a été posté pour AUDIOPHONICS MPA-S250NC XLR Amplificateur Stéréo Class D Ncore 2x250W 4 Ohm
Very good stereo amp
I am using this ncore stereo amp MPA-250nc in my bedroom together with audiolab 8200cdq and the combo is terrific. Sound is very punchy and dynamic. No harshness and you can turn up the volume to high levels and the sound stays good. I am using it with monitor audio gx50 loudspeakers.
I have had many amps (plinius, emotiva, denon) and this ncore amp is very good in comparison. I am thinking to replace my emotiva xpr-5 with purifi based amps in the future for the living room as well. Highly recommended.
(0)
(0)
Cet avis a été posté pour AUDIOPHONICS MPA-S250NC XLR Amplificateur Stéréo Class D Ncore 2x250W 4 Ohm
upgrading to 5-star
I bought one of these for my stereo rig. It performs beautifully and reliably.
I like it so much that I've ordered 2 more to update my 4.1 surround system to an efficient, powerful class D setup.
Other class D modules from Hypex and Purifi might measure better but I doubt that I could hear the difference.
(0)
(0)
Cet avis a été posté pour AUDIOPHONICS MPA-S250NC XLR Amplificateur Stéréo Class D Ncore 2x250W 4 Ohm
Superb sound and value
I came from an ICE-power amp that was very similar in size (-10W). It cost more, but was older, too. That said, this little guy performs beautifully, it is the most honest amp I have ever had. An even earlier amp that I have enjoyed is the Parasound A23. Neither of the aforementioned amps comes close to what the little Ncore delivers. The channel separation makes me wish I could afford dual mono, but this one is great at it. The whole soundstage opened up a bit more and I thought that was one of the good aspects of my ICE power amp. Instrument separation improved, too. It seems as there is a bit more air around each one. That they are more localized across the stage.

There is one real negative though and it has nothing to do with the sound, but rather the esthetics of the circle of light on the switch. Too raw, bright and thick... no finesse visually for a little amp that exudes finesse with its sound... oh well, can't have it all at this point... so I will settle for what counts- most of the great stuff and a very fair price.
(0)
(0)
Cet avis a été posté pour AUDIOPHONICS MPA-S250NC XLR Amplificateur Stéréo Class D Ncore 2x250W 4 Ohm
mzprx
I have an nc400 and now an MPA-250NC. I can't tell the difference between amplifiers :-).
Hypex, Audiophonics good job :-)